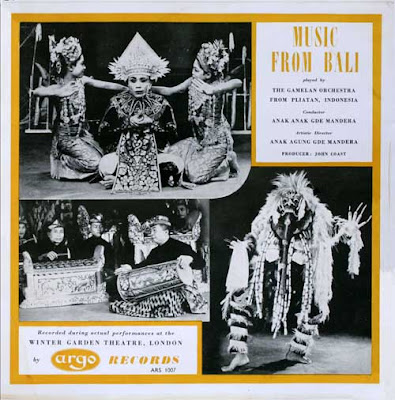 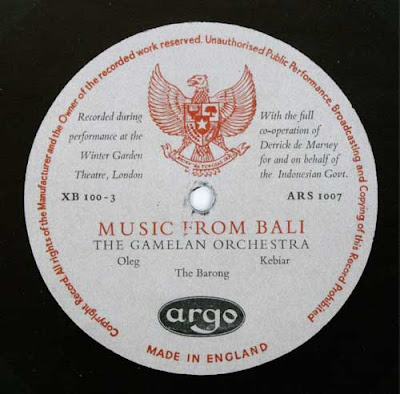 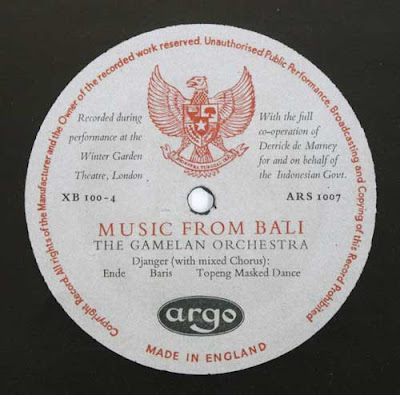 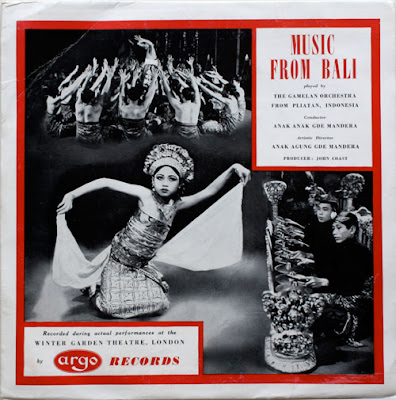 This is the cover of Record One that is already here in a previous post and to be quite frank I never expected to find Record Two, but here it is! It did however cost me a pretty penny and lot of determination to be able to share it with you and present it here. It makes me very happy and I hope you can share my joy! This copy is in wonderful condition and the photography of the sleeve is a joy to behold. There is not much to add to this post as almost all I know about it is already in the previous post!

It is a commonplace of musical history that Claude Debussy was considerably influenced by the Gamelan which appeared at the Exposition Universelle in Paris during 1889. But, with the exception of a number of Dutch musicologists — notably Dr. Jaap Kunst—few Western music lovers have any knowledge of Balinese music and the opportunities of hearing it-such records that do exist being almost unknown in Great Britain and the U.S.—have been few. Indeed, so far as London and New York are concerned, the recent appearance of the Gamelan from Pliatan, Indonesia, under its brilliant director, Anak Agung Gde Mandera, is the first opportunity the music lover has had of assessing this fascinating and highly organised musical art. Unlike much Eastern music, Western ears have no difficulty in appreciating the music of Bali, and it is certain that with the issue of these, the first long playing records, made in collaboration with the Indonesian Government, many will wish to become more closely acquainted with what, is, quite clearly, a folk art in the highest stage of development, In the opinion of those but qualified to judge these records present an adequate survey of Balinese music as it is today and can safely be said to serve as a comprehensive introduction to this neglected-so far as Western ears are concerned-branch of music. 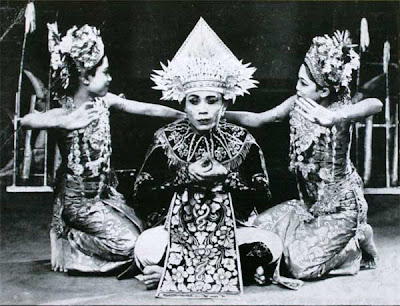 Kebiar. This dance, created during the early thirties by a famous dancer from South Bali, inspired Anak Mandera to compose what many consider to be one of the most beautiful pieces co contemporary Balinese music. Following a bold statement of the principal motif a gentle swaying accompaniment is heard underlined, as it were, by the lower gong. Working gradually towards a climax the main theme is restated in augmentation while the accompaniment becomes more excited breaking into an ostinato figure accentuated by syncopated chords on the barong. This fine example of the Kebiar was awarded the all-Bali prize in 1938. 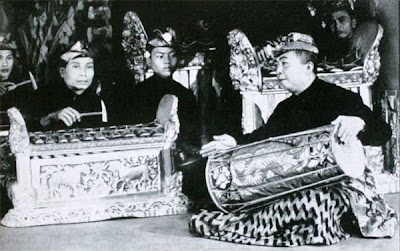 Oleg. As in the preceding work this music accompanies a modern dance, in this instance one from North Bali. It consists of a simple melody reiterated on the Hatong or Balinese flute accompanied by a variety of complex rhythmic patterns played on the various sections of the Gamelan with a bewildering subtlety of tone colour that is an outstanding feature of this branch of Indonesian music. 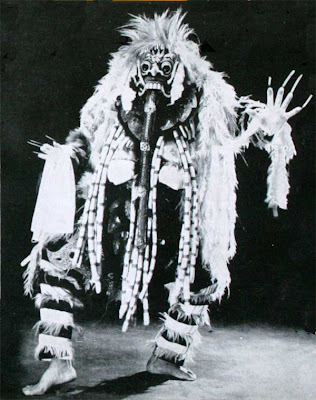 Barong. Is one of the many primitive dance-plays that are highly thought of by the Balinese. Barong is a mythical animal, a fantastic lion, who protects the Balinese against evil. He fights against Rangda. Queen of the Witches, symbol of darkness. Illness and death. The music consists, in the main, of a constantly repeated figure against which the roan of the lion are heard. At the death of Rangda the gamelan bursts into a jubilant statement of the main theme bringing the work to a close on a note of triumph.

Djanger, Ende, Saris. The first of these three dances. Djanger, is a simple folk tune sung in unison by boys and girls. It is a typical example of its kind. The second, Ende, is a fighting dance. A sham duel is fought out to the stimulation of a small gamelan consisting of kendang, small gong, and tarompet. The fighters are dressed in grotesque costumes and armed with roatan sticks. Although intended as a friendly sport there have been instances of the fighters continuing to the death. The third, Baris, is a short dance-play, in which Ardjuna, the hero of the Mahabhara epic is disturbed, while fasting, by heavenly nymphs, sent by the Gods to test him to see whether he is strong enough to become their champion against the Demon King. Alarmed, the Demon King sends a wild boar against Ardjuna who kills it. His claim is disputed by the God Shin. To settle this dispute Ardjuna fights Shiva in his human form and on winning the contest is proclaimed by the Gods.


Technical Credits. Recorded during actual performance at the Winter Garden Theatre in association with Mr. Derrick de Marney  for and on behalf of The Indonesian Government. The original magnetic tape recording and transfer of the record to disc masters was mad. by Alec Herbage, Harley Usill and Cyril Clarke. The sleeve and label was designed by Victor Ross. Photographs by Dennis de Marney. 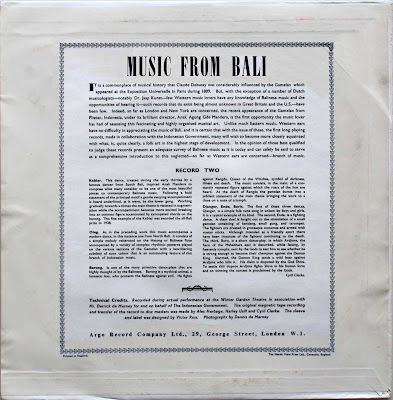 The link is missing. 404 error

No it is not! It is the same problem as with the Afghan record! Click only on the arrow! Not just the word "Music" I'll fix it later OK ;-)

Great, what a find, bo! My heartfelt thanks to you for hunting this rare record down and sharing it with us, even if it meant that you had to spare some pennies. This is wonderful of you, and for sure, such acts of kindness will return to you many times over, not only here but in the "real world" as well!

wow bolingo, such strange and fantastic timing! i happened upon this very same volume 2 in a used bin just two weeks ago. the record cover is itself a thing of beauty. bewitching.

Thanks for pointing out the arrow on the link. Got it now.

Thanks a lot dear Bo, much appreciated.

The file is no longer on the server. Ca u pls reload?

Your blog is really wonderful! Thank you. But there is one little problem in this great post - the downloaded file size is 0 b. Is there any possibility to correct such situation?

yes the adrive file is o bytes.
i love your site as always
so the link is fine but there is nothing in the zip
robert

Well, I am in India since last year so I cannot fix it until I get back where the original file is in the meanwhile if anyone has downloaded the file and kept the original content just upload that and post a link to that here until I can fix it properly myself in some time …

We were in luck I found it on one of my hard disks here ! So here is a new link for you … Please tell me if it is working now.

Link updated in the original post as well!
Thanks for pointing it out!

link is working now
thanks
love these argo records
robert

Great! Thank You! Everything is fine now.