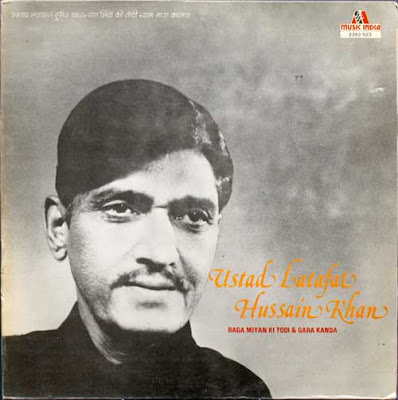 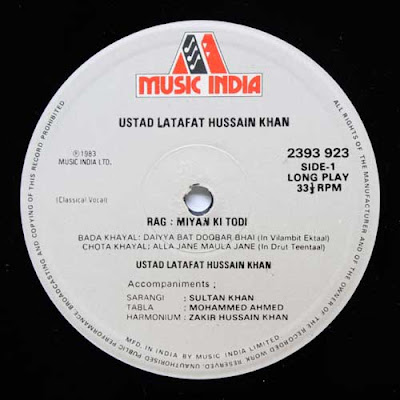 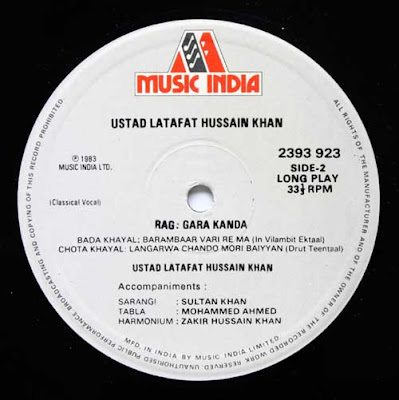 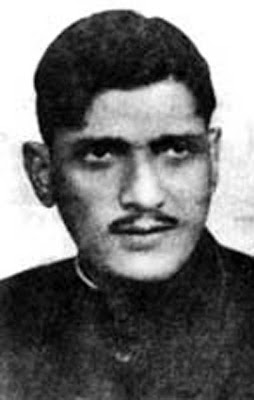 Ustad Latafat Hussain Khan belonged to the tradition of Khandani musicians, who held aloft and carried forward the torch of musical learning and excellence. Both as a performer and as teacher he had the unmistakable mark of a gharanadar musician. Deeply religious, self effacing and unassuming by nature, he was always willing to give - qualities that were very clearly reflected in his music and in his approach to the performance and teaching of music.

Born on December 12, 1920, Latafat Hussain Khan was the youngest son of Altaf Hussain Khan of the Agra gharana.

He was initiated into the rigours of music by Tasadduq Hussain Khan. Then followed an extended training period under his eldest brother Ustad Khadim Hussain Khan in Bombay. Sometime in the early forties, he went to Baroda to stay with his uncle, Ustad Faiyyaz Khan and receive rigorous taleem. He also took advanced taleem from his gharana elder, Vilayet Hussain Khan.

Latafat was musically a successor to Ustad Faiyyaz Khan. He was particularly known for his powerful voice, his crisp nom-tom alaps, and his effervescent delivery. With his masculine voice, dhrupad based alap, he was in the mainstream of the Agra gharana. In voice production, he was close to Ustad Faiyyaz Khan — a deep penetrating voice with tremendous control on swar and shrutis, a voice that delibera" tely created broken nuances while singing the "rangila phrases made famous by his ustad. His alap was rich and his raga portrayal was sublime. Latafat Khan composed hundreds of bandishes under the pen name of "Premdas".

Like most exponents of the Agra style, Latafat Khan was a scholar musician, ever true to the ancient tenets of classicism and very concerned with what was "correct" and "pure" and very disdainful of compromises made all too often by younger musicians who sometimes sacrificed authenticity for easy popularity. At the same time, like many others of his famed gharana, he gave great importance to the entertainment value of classical music. This was achieved by the judicious use of "layakari", the choice of colourful bandishes and the clever utilization of tans.

Latafat Khan was honoured by Sur Singar Samsad in Bombay and was also the recipient of a host of other awards. In 1978, Latafat Khan joined the Sangeet Research Academy of the I. T. C. at Calcutta as a Guru and trained several pupils. Even though his health was giving him trouble and his voice was losing its grit and quality possibly due to his asthmatic trouble, he was a greatly revered and respected musician. Those who came into contact with him will never forget the warmth of his nature. ITC Sangeet Research Academy raised Latafat Hussain to the national level again through concert appearances in all parts of India. 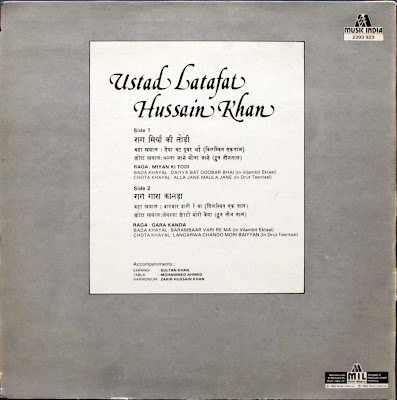 no signs of slowing down over here. marvelous share

You have any of his non commercialized recordings? i have a lot for exchange

I thought I had listened to all the commercial recordings available of Latafat Hussain Khan, but here's something I haven't even seen before. Its a pleasure to come across surprises on such a regular basis.

Thank you so much for this rare LP!!