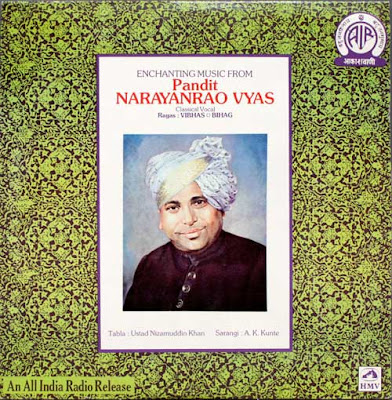 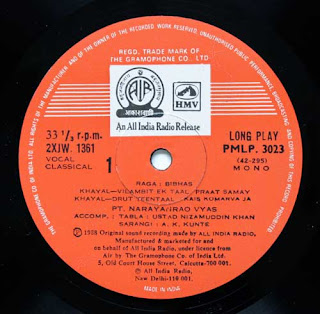 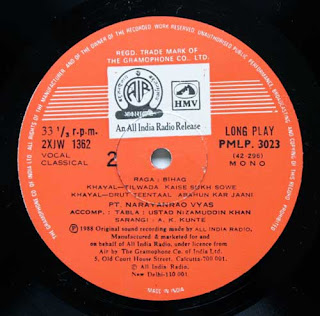 I am happy to post another treasure. This is again one of the real masters captured in old age His output of 78 rpm's is almost unsurpassed. Here is a discography that will make anyone salivate could we only have some more of those records reissued.

Pandit Narayanrao Vyas was one of the most outstanding diciples of Pandit Vishnu Digambar, who carried forward his guru's mission both as a performer and as a teacher.

Pandit Narayanrao Ganesh Vyas, the younger brother of Shri Shankarrao Vyas (1898-1956), was born in Kolhapur on April 1, 1902. At the age of nine, he joined the Gandharva Mahavidyalaya at Lahore where his elder brother had already joined the `Gurukul` system of music education initiated by Pandit Vishnu Digambar Paluskar in 1901. He was trained by Pandit Paluskar for ten years, after which both brothers came to Ahmedabad in 1922, where they began to teach in the local Gandharva Mahavidyalaya branch.

In 1926, they moved to Bombay where Shankarrao Vyas chose to enter the film industry as a music director. Narayanrao Vyas, however, chose to remain a teacher and a concert performer. He started performing in music festivals and from 1929 to 1955, he cut over 150 records in the 78-rpm format for the Gramophone Company (HMV) in Mumbai. The recorded songs are classical khayals, thumris and semi-classical bhajans. He often sang ragas using Marathi bandishes. The popularity of his records earned him HMV`s best seller gold medal. Narayanrao used to sing on Radio too. He toured and traveled extensively and sang in prestigious music conferences and concerts throughout North India. He was also proficient in playing the Harmonium, Tabla, Sitar and Jaltarang.

To fulfil the desire of their Guru to spread and popularise Indian classical music, the Vyas brothers decided to start a music academy in Bombay. Thus the Vyas Sangeet Vidyalaya was set up in June 1937, to impart lessons to students both in vocal and instrumental music. The school continues to function to this day.

Narayanrao Vyas was one of the most popular and sought-after vocalists of his generation. He was honoured with several awards, including the Sangeet Natak Akademi Award in 1976 and the Tansen Award of the Madhya Pradesh Government in 1983. Among his disciples were his own son, Vidyadhar Vyas, his guru`s son, Dattatreya Vishnu Paluskar, the legendary Carnatic vocalist, M S Subbalakshmi and several others.

For Narayanrao Vyas, music was not only a means of livelihood but also a way to salvation. He was a believer in the purity of music and remained a traditional singer throughout his life. He remained active even in his old age and died in 1984. 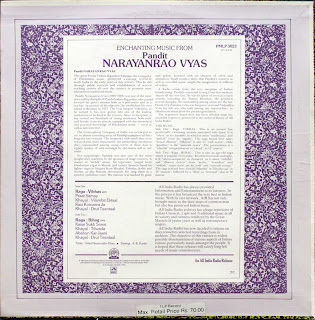 one of the greatest singers of last century. no one could compact a raga to a mere 3 minutes as convincingly as narayanrao vyas

Thank you from the bottom of my heart for this feast of rare and valuable music, bo! The thought that all this music will now live on in various parts of the world gives one some hope for the future!

A beautiful record! Makes one think of the possibilities if these artists were alive in the age of CDs. We might have had access to entire concerts.

Thanks for the experience, bolingo!