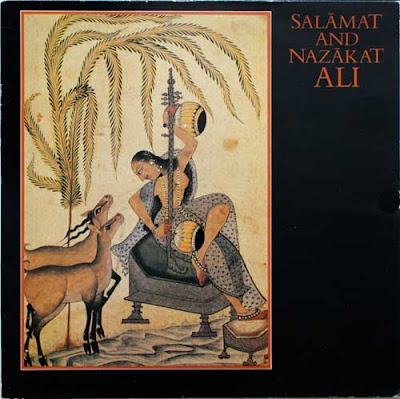 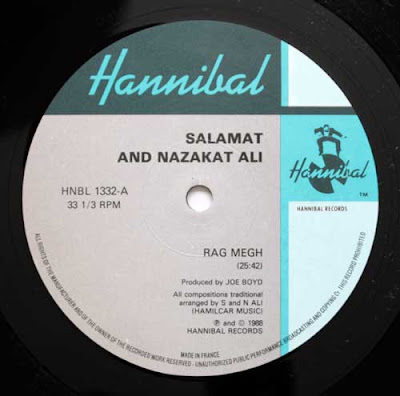 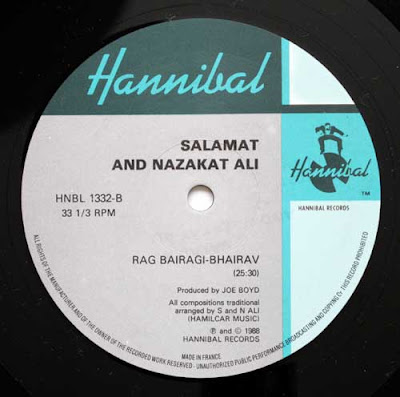 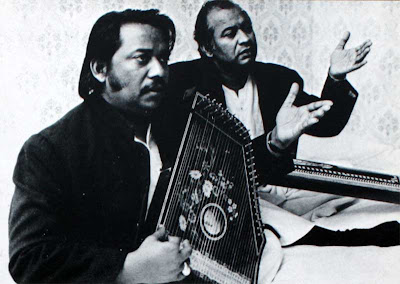 The two brothers - Ustad Salamat Ali and Ustad Nazakat Ali - are a legend in the world of North Indian classical music. They learnt from their father - Ustad Vilāyat Ali Khan and are the doyen of the Shim Chaurāsi Gharāna - or tradition of singing. A unique feature of their music is the contrasting but balanced performance of the two singers; Salāmat Ali being the more virtuosic with the most incredible and breathtaking technical skill no less matched by his wonderful musical phrasing; Nazakat Ali providing a more’ gentle, sombre and austere accompaniment.

It is a pleasure to listen to this recording in 1988, particularly because it was first recorded in 1970. and reflects truly the quality of their music at the height of their skills. The artists have a most sincere approach to their art and always give of their best, whether in live performance or in the recording studio the standard is always the same.

My introduction to them was in concert in 1969, during their first visit to London at the Commonwealth Institute. The prospect of seeing the two brothers perform was an exciting one and I was not disappointed in my expectations. They sang one Rāg for about an hour and a half, keeping the audience absolutely spell-bound. Since then, sadly. Ustād Nazākat Ali has passed away, making this recording of the duo an even rarer treat. Today Ustad Salāmat Ali performs with his own son Sharāfat Ali, thus continuing the family tradition and it is a pleasure to say that Ustad Salāmat Ali will, even by his current performances, enter into the annals of Indian music as one of its greatest exponents. The style in which the music is sung is called “Khyāl”, and is the most popular rendition of classical vocal music of North India and Pakistan today. Khyāl has superseded the more ancient and austere tradition of Dhrupad over the last 200 years or so. The word itself means “imagination” or “fantasy”. The hallmark of Khyāl therefore is the freedom it allows an artist to be creative and to improvise, which Dhrupad did not allow to such an extent and, as a result, singers developed incredible virtuosity and vocal technique. This is most evident in Ustad Salamat Ali’s music. This utterly gifted artist has a powerful voice moving through a range of three octaves with ease. Salamat Ali has great control, ranging in the use of Gamak (fast wide vibrato) to the very fine ornamental phrases.

As with virtually all traditional Indian music three math elements are discernible in this recording. The first is the drone - played on the Tanpura. The second is rhythm - played here on the Tabla. The third is the main melodic line. The two singers alternate in their improvisations around a predetermined composition or Bandis in slow, medium and fast tempi, thus only one melodic line prevails. A fourth element is represented by the Sarangi - a beautiful bowed instrument which echoes the math melodic line and occasionally “fills” in with the Sarangi player improvising in his own right. In both pieces the musicians follow the traditional pattern of Khyāl. Each Rāg begins with a Bara or Bilampit Khyal in which tbe tempo is very slow and over which the singers create phrases in the Rāg working their way gradually up the scale. Each phrase or idea is concluded by returning to the “ciz” - a short refrain ending on the sum or the first beat of the Tal. The music gains in intensity and virtuosity as it progresses in a spiral fashion up the scale and eventually faster in tempo. The rhythm changes markedly into the Chotā or Drut Khyāl in which the central composition or Bandis alternates with fast and beautiful phrases. The pieces end with a Tarana - sung in very fast tempo, bringing each rendition to an exciting conclusion.

It is interesting to note that both the Rāgs performed here are pentatonic. They have the same intervals except that Bairāgi has a flat second and Megh has a natural second, the other intervals being the tonic, the fourth, the fifth and the flat seventh. The result is an astonishing and completely different mood and hence rendition. Rāg Megh is associated with the rainy season, with love and anticipation. As it is sung on this record it has a very romantic feel. The Rāg Megh is traditionally performed in the late afternoon or the late evening. Bairāgi on the other hand is associated with a sad mood and is devotional and often expresses the individual’s longing for God personified through human love. This Rāg is usually performed in the early morning.


text above extracted from the backside of the record sleeve 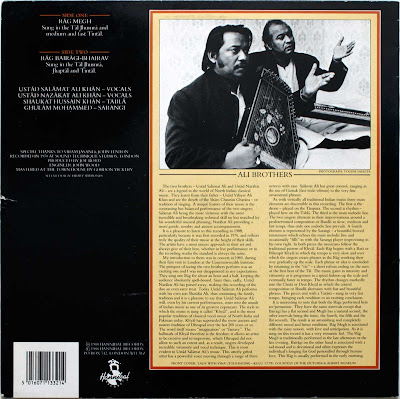 many thanks for this and other wonderful treasures

Aah, Bolingo, actually I should sing your praise in each and every of your posts. But I guess you have to do with an occasional round of cheers from my side...

as always I am happy to see old friends here now and then and can easily understand if you don't leave comments on each and every post...

And it is a constant joy to see signs from you when you do of course.
Sudzy, ZhuZhudoggie, AB !

Happy to see you all coming around!

Nice to see the synchornicity between here and Tawfiq's blog :) It seems we're having a Nazakat-Salamat special now. Thanks very much to both of you!

great thars another LP i don't have to transfer..it's a cracker though isn't it

Beautiful; The Megh in Jhumra Taal is so wonderfully serene. Thank you for this.

hello dear ...can i parchez this record ...salamat nazakat ali ...?

This link is no longer active, can you provide a newone?