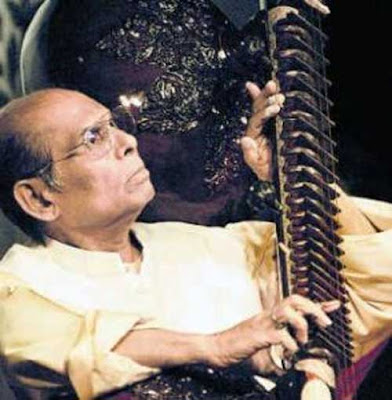 I am posting the sad news about Ustad Asad Ali Khans death at the age of 74 and since I don't have anything else available on vinyl I am pointing out a very recent post here with one of his early records from the seventies!

Rudra Veena exponent Ustad Asad Ali Khan, one of the last existing advocate of the Khandarbani dhrupad school, passed away in the wee hours here today. He was 74.

The classical musician who represents the 12 generation of Jaipur's Beenkar Gharana breathed his last at the All India Institute of Medical Science at around 2:30 am, his adopted son and disciple Ustad Ali Zaki Haidar told PTI.

"I had taken Ustad ji to hospital in the evening for a routine check-up and he was admitted around 7 pm. They conducted routine tests. Around 2:00 am while he was watching TV in his air-conditioned room, I noticed he was sweating. He passed away a little later," Haidar said.

Ustad Khan who was unmarried is survived by his nephew Haidar whom he had adopted as his own son at a very young age and trained to become his successor, said Pawan Monga, a disciple of the Rudra Veena exponent.

His father later moved to the princely court of Rampur where he undertook to teach him music. For the next 15 years he learnt to play Rudra Veena, practicing 14 hours a day. Ustad Khan was a artiste of the All India Radio and participated in 'sangeet samelans' and musical performances across the country and the world. He has also performed at concerts in Afghanistan, Australia, Holland, Italy, New Zealand, the United Kingdom, the US and other countries.

Ustad Khan has also been a professor of music at Delhi University. Rudra Veena, an instrument said to be created by Lord Shiva, has remained essentially unchanged for millennia.

It comprises a bamboo piece mounted on two gourds and has 19-24 frets fixed with beeswax with four main and three side strings having a range of four to four and half octaves. Unlike a sitar or sarod, the rudra veena does not have resonance strings.

Ustad Khan used to play dhrupad in tile kharbandi style, which is one of the four ancient styles of Indian music. It is named after Khanda, the Rajput warrior's traditional sharp curved sword.
Posted by bolingo69 at 8:08 PM

Sad news indeed, he was a true scientist and poet of Sound. May he rest in peace, Rahmatullah aleihi. I think it's very touching that we gathered here, listened and discussed his beautiful music during his last days in this planet. My deepest thanks for giving us all this opportunity, dear Bolingo.

May he rest in eternal peace, and may his music live on and find many new listeners through the efforts of blogs such as yours and Tawfiq's.