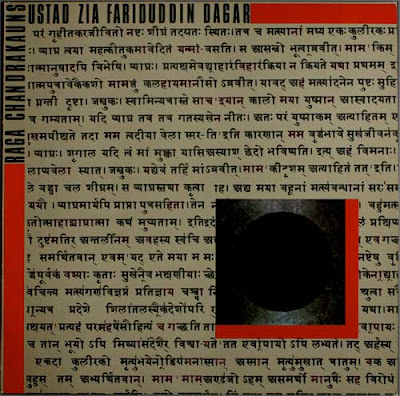 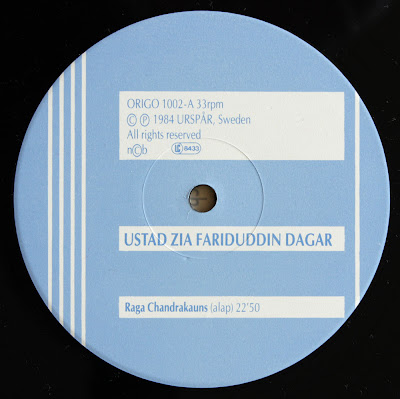 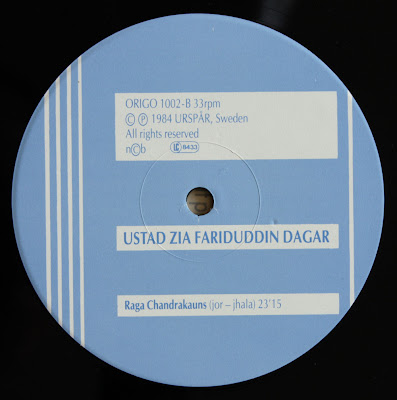 But here Chandrakauns is served in one piece at 46'36 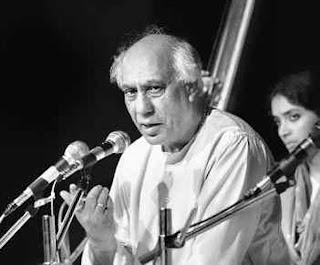 Nuances of the notes

Ustad Fariduddin Dagar is one of the oldest living exponents of the Dhrupad and his music makes serious demands on the listener, writes Deepa Ganesh after a chat with the maestro.

He is an authority on the Dhrupad; on all classical forms of music, in fact, including Carnatic music. As the conversation progresses, you learn he is in tune with everything — from politics (something he is very condescending about) to the music scene (his life's breath).

Dhrupad, the oldest existing form of north Indian classical music, has become synonymous with the Dagar family. So much so one wonders if the form existed before them. In fact, any discussion on the Dhrupad remains incomplete without bringing the Dagars into it.

Dhrupad, which represented the noblest style in Indian vocal art, was patronised by royalty. But during the first half of the 20th Century, the all-pervasive Khayal took over and Dhrupad became the preserve of a few families. The democratisation of royalty also led to decline in patronage, throwing artistes into financial hardship and severely impacting the age-old guru-shishya parampara.

Since the mid-1970s, as a result of broader re-evaluation, Dhrupad has enjoyed a revival. With the younger members of the Dagar family, disciples, and other families, this extremely contemplative form of music is steadily making an effort to reclaim its position at the centre of the Indian musical tradition.

Dhrupad was originally a Hindu tradition. Most compositions are also on Hindu deities. But interestingly, the tradition has come to rest with Muslim musicians.

Explains Ustad Fariduddin Dagar Saab: "My ancestor Baba Gopal Das was a Hindu. My ancestors were court musicians in the darbar of the Mughal king Muhammed Shah Rangeela. It was the custom to wind up the performance by accepting paan offered by the king. When my ancestors did so, there was a huge uproar in the community: `by accepting the paan you've become Muslim'. `So be it,' said my ancestor," he narrates nonchalantly.

With the coming of Khayal, a tradition that makes for easier listening, in the early half of the 20th Century, Dhrupad moved to the periphery.

Why did the Dhrupad lose ground? The Ustad takes umbrage at this, insisting it was never unpopular. In fact, in the absence of royal patronage, musicians gave up singing the Dhrupad, because they did not have anybody to take care of them. "When my father passed away, I was a young boy. And the king, who was my father's patron, was out of power. But when he heard of my father's death, he sent his men to see how the family was." From that day till his death, the king bore the expenses of the family. "That was the commitment. But I can't expect the same to happen in my case. I'm sure after my death, my family will be thrown out of the house they have given me in Bhopal."

The maestro is furious with the state that does not try to preserve or protect its culture. "Politicians aren't capable of any good," he says. "What has your State done to take care of its musicians? Adil Shah of Bijapur was such a big poet. We sing so many of his poems. Have they preserved his works? He has done so much for music, architecture and paintings."

Ustad Fariduddin Dagar doesn't think much of Khayal, but doesn't reject it totally either. "Khayal also has a tradition. But now there is nothing in place; everyone plays to the gallery. The early Khayal singers had a firm grounding in Dhrupad." The Ustad, legendary for his total involvement, famously said: "When I close my eyes and begin to sing, there is only darkness... slowly, light comes, then the beginnings of colour." He explains how the musician is alone with the "vastness of the self" and musicality lies in contemplation. Like in other Indian classical forms, the alaap is the entry point to the raga. But Fariduddin Dagar says that if a listener fails to comprehend the alaap, he should be able to do so at least with the lyrics.

The singer's treatment of the composition should evoke the mood of the raga. "You can sing for hours, but you should be able to grab the soul of the raga."

Due to its strict adherence to purity, learning Dhrupad is very difficult. Is that what makes people think Dhrupad is rigid? "According to me, there is immense freedom. Khayal is like the romantic period in music," he elucidates. Though there have been master composers like Mozart and Brahms in the West, Bach is still the colossus. "Bach's music is on a different scale. There is no romance in his music. It is spiritual. And that is true of Dhrupad too."

In fact, there are many big-time Khayal musicians who trace their inspiration back to this grand old form. Some musicians even talk of a Dhrupad element in their rendition of Khayals. "Everybody now wants to claim the Dhrupad style. Thirty years ago, when it was forgotten, nobody talked about it as their source," says the Ustad indignantly.

"You can't go to a Dhrupad concert like you go to the films. When you set out to please your audience it doesn't work. A musician has to feel convinced about what he is singing, be believes.

How does one explain the West's penchant for Dhrupad? Is it an extension of its fashionable affinity for everything spiritual? For the Ustad, whose life centres on Dhrupad alone, this is too complicated. "They are very curious about it. But they like to listen to the alaap and not pada. They go into minute details and it's very heartening to perform for them," is his simple position.

This makes an interesting comparison to what Alain Danielou, a Western scholar of Indian music, has to say about Dhrupad: "Its verbal and emotional dignity is conveyed by slow, elephantine movements and with utmost economy of flourishes and decorations."

You know what that means when the maestro sings. His music is sensuous, subtle, and intensely spiritual. As he unfolds the notes of Shuddh Sarang, you know there is no escape except to surrender to it completely.

In the typical contemplative, unhurried, probing fashion, he delves into the nuances, note by note. The amazing flexibility of his voice, the exuberance, and sheer joy of the experience of singing makes such exacting demands on the listener that it leaves one exhausted. 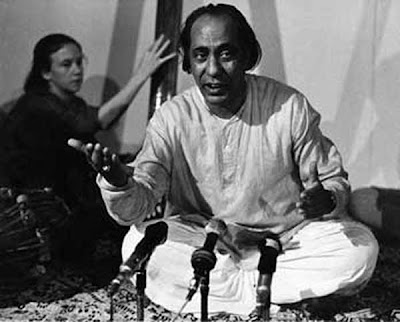 I hope you all appreciate this recording, several friends were involved in this production and to my knowledge it has never been reproduced on CD. The picture above may be from the same concert as the recording since it was taken in September 1981. The record was produced by Hans Isgren and engineered by Peter Hennix at his private loft where many wonderful concerts of Indian classical music took place. I hope you will enjoy it. Again like a recording of ZMD that i posted some days ago, this also had an unfortunate split in the middle to fit on the two sides of an LP. No such scars remain as that cut has now been "healed" and the concert is again "uncut". 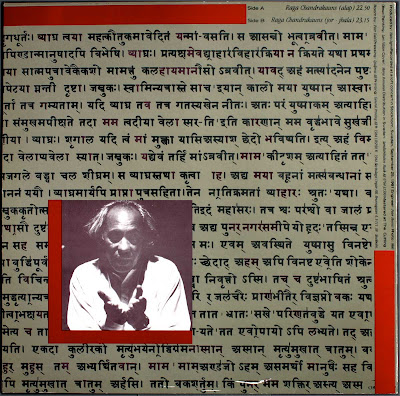 This is beautiful. Thank you very much, bolingo69!

Stunning performance and great sound too. Didn't know there was such a record around. Thanks!

Its nice of you to celebrate the Ustad's special day with this treasure of a recording, bo. Love the atmosphere on this recording. Actually, its something I often wonder about - why they don't make more such recordings these days. Intimate recordings in rooms with good sound and a loving, though small bunch of listeners.

ah, the chandrakauns! this is wonderful! in fact, i first heard it when you ripped this for ska and it's one of the best i know of! and of course, arvind is right: the sound does justice to the music. of course, in the world of 'professional' recordings of the present day, we should not expect such sound from new releases; the hope lies in the private recordings (like bhawalkar's shuddha kalyan recording). with such examples i keep wonder: is the 'western standard' of music recording the best option for such particular music like dhrupad? after listening to recordings like this one, there are serious doubts...

It's nice to hear such a deep rendering of Chandrakauns, a raga too often confined to tala-keeping in tabla solos! :)

Many thanks for rescuing this gem from the depths of obscurity! And by “this gem”, we mean the beige-looking inlay, which we don’t have in our copy of the LP. :(

For perhaps obvious reasons, we can’t abide by raga Chandrakauns so we have never listened to this recording before. Playing it through now, it is indeed exemplary. But is it really “western standards” that are ruining contemporary dhrupad recording or is it two singers from India with an inordinate love for reverb and singing very close to the microphone ...?