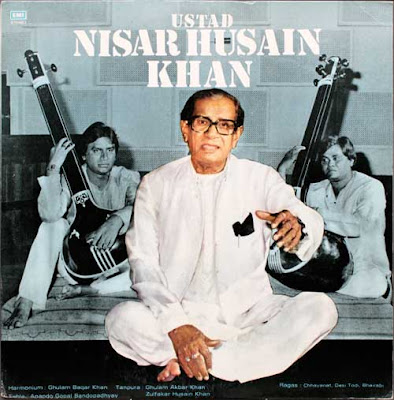 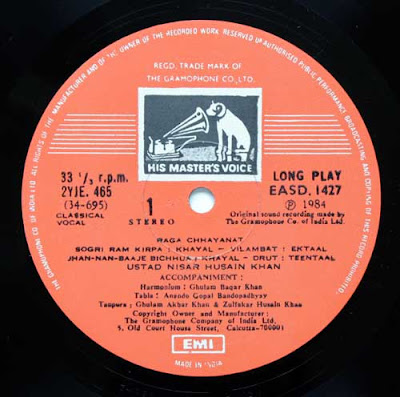 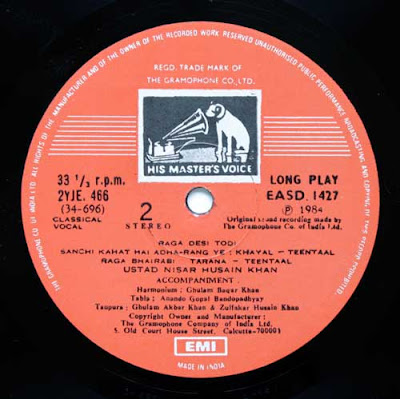 Ustad Nisar Hussain Khan has throughout been acclaimed as one of the greatest exponents of North Indian Classical Vocal music and today he is indeed the foremost amongst the performing Ustads in the country. He hails from Rampur district which at one time was known to be the blessed abode of classical music and musicians' in North India.

The rulers of Indian States had till then been continuing with their patronage for nourishment and propagation of classical music. Sir Siyajirao. Gaekwad of Baroda, was greatly impressed by the remarkable artistry of Ustad Nisar Hussain Khan and the Ustad flourished as Court Musician of Baroda for long thirty years.

Ustad Nisar Hussain Khan has developed a distinctive style of his own which savours of a synthesis between two prominent schools of Khayal singing - Sahaswan and Rampur. His unique voice is sonorous and assertive. With innovative phrases and colourful patterns. Khan Saheb renders Khayal like a great architect. He expounds Ragas in a very systematic way and his Taans gliding reposefully through octave after octave are not only accurate but crystalclear as well. His Bol-taans in Tarana are his speciality and the excellence of his virile but polished style of presentation has earned him a very prestigious position in the realm of Hindusthani Classical music.

Listening to Ustad Nisar Hussain Khan is always an experience and a present-day connoisseur might wonder how the performing art of the Old Master could develop so much dynamically keeping pace with the stride of time. The septuagenarian tistad has kept himself alive to the modern trends and his expositions always reflect his progressive outlook and a freshness of creativity.

Ustad Nisar Hussain Khan has been the recipient of many honours and Tamra Patra awards. In 1970 he was awarded Pad ma Bhushan'. He received Fellowship of Sangeet Natak Academy in 1971. Uttarpradesh Natak Academy felicited him with Award and Fellowship in 1972. He was titled as Sangeet Mahamahopadhaya by the Hyderabad Gandharva Mahavidyalaya in 1968. Khan Saheb headed India's Goodwill Mission to Nepal and Afganisthan in 1975. He visited London in 1976 on invitation to perform in an International Conference.

In this album Ustad Nisar Hussain Khan has presented Raga Chhayanat on the first side. The Vilambat Khayal is in Ektaal and the Dna is in Teentaal. The Raga unfolded in a traditional manner, has been elaborated in all its facets with highly imaginative phrases and utter precision. The Taans are lively and amazing.

On the second side Khan Saheb has first rendered a Khayal in Desi Todi set to Teentaal. The sentiment of the Morning melody has been brought out with emotional fervour and keen sense of aesthetics. The Ustad has concluded his recital with a Tarana in Bhairavi and the composition is in Teentaal. The intricate rhythmic patterns and Bol-taons executed in his typical style are not only attractive but give clear glimpses of Khan Saheb's incomparable virtuosity.

Sarengee accompaniment provided by the veteran Ghulam Baqar Khan and Tabla by the young talent Anando Gopal Bandopadhyay are additional attractions of this album. 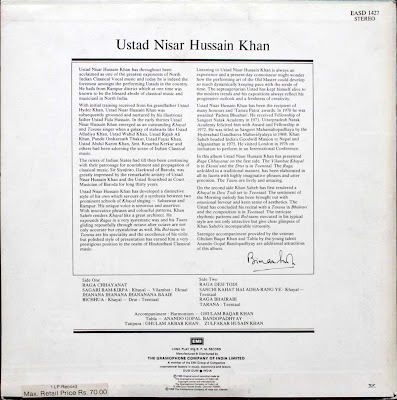 Yes, this is a great album. Thanks very much, bo!

Exceptional music, what a bhairavi. Thank you very much, bolingo!