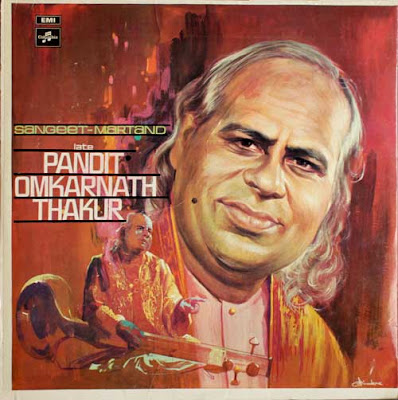 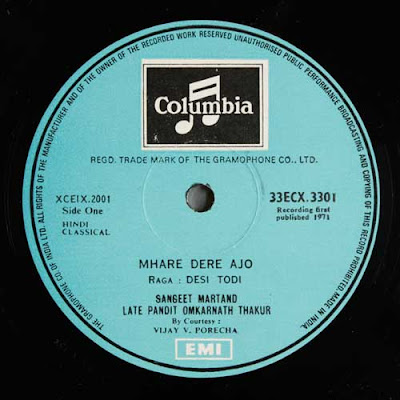 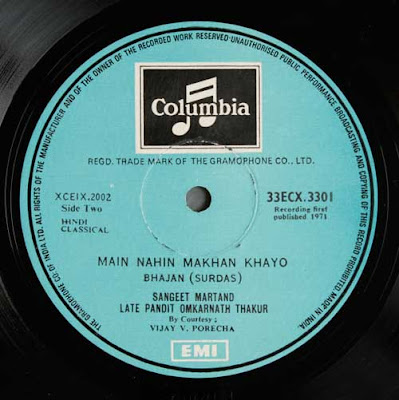 Here is a very good record by a remarkable artist who I appreciate very much. I have only a few more records by him that I will post shortly. Look out in the following days for at least two more recordings with him! Hope you enjoy 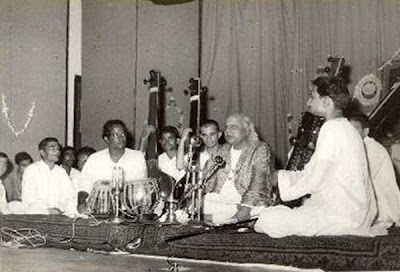 
Omkarnath Thakur was an Indian educator, musicologist, and Hindustani classical singer. He is famously known as "Pranav Rang", his pen-name.
Thakur was born 1897 in a village in the Princely State of Baroda into a poor military family. The family moved to Bharuch in 1900 and in circa 1909 Thakur and his younger brother began to train in Hindustani classical music in the Gandharva Mahavidyalaya, a music school, under classical singer Vishnu Digambar Paluskar. Thakur and his brother were sponsored by a wealthy Parsi and Thakur became an accomplished singer in the style of the Gwalior gharana.

Thakur was made the principal of a Lahore music school of Paluskar's Gandharva Mahavidyalaya in 1916, became acquainted with the Patiala gharana, and started his own music school in 1919. During the 1920s Thakur worked for the non-cooperation movement of Mahatma Gandhi on a local level and in the 1933 became one of the first Indian musicians to perform in Europe, which included a private concert for Benito Mussolini. Thakur's wife Indira Devi died the same year and he began to concentrate exclusively on music.
Thakur's work as a performer and musicologist led to the creation of a music college at Banaras Hindu University that emphasized both and he wrote books on Indian classical music and its history. Thakur's work is criticized in contemporary music literature as ignorant of the contribution of Muslim musicians, which he blamed for deteriorating classical music. Thakur performed in Europe until 1954 and received the Padma Shri in 1955 and the Sangeet Natak Akademi Award in 1963. He retired in 1963 and was awarded honorary doctorates from Banaras Hindu University in 1963 and Rabindra Bharati University in 1964.


snipped from the Wikipedia here


It is now four years since the sweet roar of the giant amongst vocalists of Indian classical music was stilled forever. Those who had the good fortune to listen to him in person will forever remember his Regal Personality and his inimitable style. Disciple of Late Pandit Vishnu Digambar Paluskar, his profound knowledge and scholarship won him high praise and tributes not only in India but even in foreign countries. He, like his great Guru, catered classical music to masses. While performing, he poured his very personality in his exposition, thereby transferring his emotionally packed rendering on to the listeners, and holding them spellbound in a celestial trance. Lovers and followers of his music are spread far and wide. On this disc is presented a very rare and scintillating performance of the great maestro.

In bringing out this number on the solemn occasion of his 4th death anniversary, we pay our humble homage to his great memory and hope connoisseurs will listen to the performance with nostalgia.


This is a morning melody and it has a mood of fervent appeal. The burden of the composition 'Mare Dere Aao' - 'Please, come to my abode' — an invocation by a beloved to her lover-sets the artiste in the proper frame of mind-of entreaty-appeal — and he goes on weaving the melody into diverse and attractive musical patterns. While doing so he scrupulously conforms to the traditional norms of exposition of a Raga. The rhythm employed is Ek Taal - consisting of 12 beats.

This is the Piece De Resistance. It narrates a story — an episode in the colourful life of Lord Krishna in his childhood. He is accused by the milkmaids of Brindaban of stealing their butter. Caught red handed, his chubby face smeared with the loot, the culprit boy is taken to his mother by the offended milkmaids. A court of enquiry is held. The presiding judge is Yashoda — the divine mother of Shrikrishna — the accused.

The dramatic trial opens — with the denial of the charge by the accused ‘Maiyya-Main Nahin Makhan Khayo’— He did not have any legal luminary to represent him — so he decides to defend himself. His defence is presented on this skie in a musical form by the maestro in such a convincing manner that, towards the close, Shri Krishna is acquitted honourably and absolved of all the charges levelled against him.

This entire drama is musically enacted by the maestro with a virtuosity which he alone was capable of.


Repertoire By Courtesy: Vijay V Porecha.
quoted from the backside of the record sleeve


Here is a little more to read 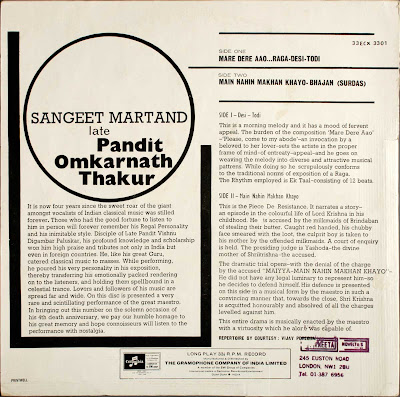 Thank you ! - A Great LP by The Doyen of the Gwalior Gharana !

I used to have this LP, and I bought the CD, but somehow the reproduction of the CD was not satisfactory. Would love to listen to your LP rip !

Never commented on your inputs but let me express my utmost gratitude for sharing this great collection.
Благодарю!!!
PEQ

once more thanks a lot!
this rip is worth to be done in lossless (as almost all vocal treasury of Eastern folk tradition), but it makes impression even in mp3.
and, of course, thanks for re-uploading it.
regards,
a

Thanks a ton, you have an amazing collection.

BTW, do you have one of Omkarnath Thakur's rare and hard to find audio recording – A 78rpm - Columbia GE3143 of a folk song (bhajan) by Meerabai and a Ghazal by of Shaida.

i did manage to find one of the songs here (https://www.youtube.com/watch?v=8bRdlzxtQn8), but its just a 3 min version