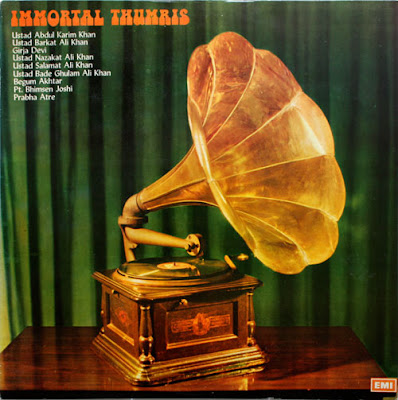 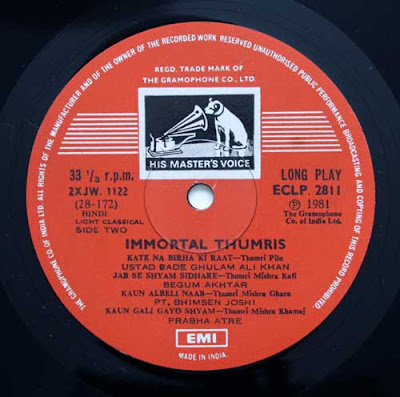 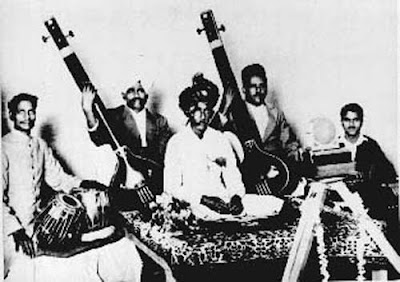 Abdul Karim Khan was born in Kairana (Uttar Pradesh, North India) in to the Kairana musical family which traced its roots to musician brothers Ghulam Ali and Ghulam Maula. His father, Kale Khan was the grandson of Ghulam Ali. Karim Khan received training under uncle Abdulla Khan and father Kale Khan. He also received guidance from another uncle Nanhe Khan. Apart from vocals and sarangi, he also learnt Veena (Been), Sitar and Tabla.
According to a story, he was initially a sarangi player, but decided to switch to vocals because of low status of sarangi players. In early years he used to sing with his brother Abdul Haq. The Baroda ruler was impressed by this singing duo and made them the court musicians. This is where he met Tarabai Mane, who was the daughter of Sardar Maruti Rao Mane, a member of the royal family. When they decided to get married, they were ousted from Baroda. The couple settled down in Bombay. In 1922 Tarabai Mane left Abdul Karim Khan, which apparently had a major impact on his music - making it pensive and meditative. Karim Khan's first wife, Gafooran was the sister of another Kirana master Abdul Wahid Khan, who was also his cousin.

Ustad and disciple Pt. Sawai Gandharva
Ustad Abdul Karim Khan was invited to the Mysore court where he met famous Carnatic music Carnatic masters which also influenced his music. In particular the singing of his Sargam was a direct influence of Carnatic practice. He became a frequent visitor to Mysore Darbar which conferred on him the title Sangeet Ratna. On the way to Mysore he used to stay with his brother in Dharwad where he taught his most famous disciple Sawai Gandharva. In 1900 for eight months he taught Surashri Kesarbai Kerkar. Kesarbai Kerkar would go on to be one of the 20th century’s most renowned vocalists. In 1913 he founded the Arya Sangeet Vidyalaya in Poona to teach students. He would wholeheartedly teach all his students unlike other family ustads of the era. He finally settled down in Miraj till his death in 1937 when returning from a concert tour of the south. Every year in August commemorative music concerts are held in Miraj.
The innovations he brought to his vocal style distinguishes Kirana style from others. The slow melodic development of the raga in Vilambit laya slow tempo was the most characteristic aspect of his music. He worked hard to maintain his voice to be sweet and melodious which shaped his music. The thumri style he developed as also quite different from the poorab ang or Punjabi ang. His thumri progresses in a leisurely languor with ample abandonment. He was also the first Hindustani musician to seriously study Carnatic system and probably the first to be invited to sing all over the south. He has even recorded a Thyagaraja Krithi. He was also influenced by Rehmet Khan of the Gwalior gharana and adopted the direct style of presentation Bhairavi of Rehmat Khan used to be bright and cheerful Karim Khan perfected it and was able to present an equally bright and cheerful rendering.

See coming posts for individual albums by him. 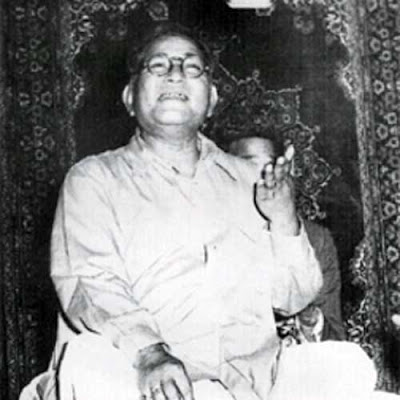 Barkat Ali Khan : four Thumris
Ustad Barkat Ali Khan (1905-1962) has left a lasting impression on various genres of Hindustani light classical music. He was younger brother of Ustad Bade Ghulam Ali Khan. By several accounts Barkat Ali Khan was a superior Thumri singer but had to content himself by playing second fiddle to his elder brother.
After partition of India, Barkat Ali Khan migrated to Pakistan and concentrated on the lighter aspects of Hindustani classical music. He made a great contribution to North Indian light classical music. He was acknowledged as one of the greatest Thumri, Dadra, Geet and Ghazal artists. His outstanding rendering techniques of Purab and Punjab Ang have no match. He captured the audience all over India and Pakistan with his unique style of music.
Ustad Barkat Ali Khan's famous disciples include Ghazal singers Mehdi Hassan, Ghulam Ali, actress singer Noor Jehan, Begum Akhtar and many more. He died a premature death at the age of 57. 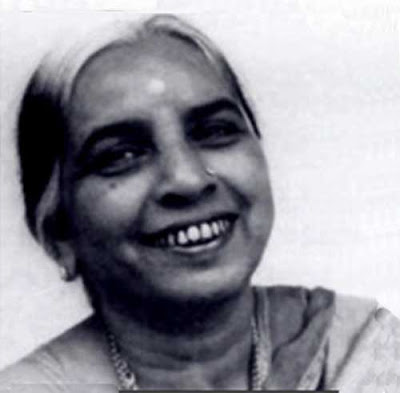 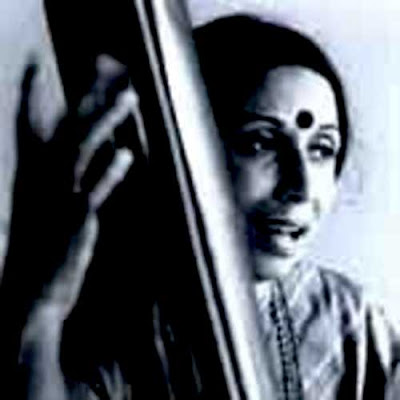 
Prabha Atre was born to Abasaheb and Indirabai Atre in Pune. As children, Prabha and her sister, Usha, were interested in music, but neither of them planned to pursue music as a career. When Prabha was eight, Indirabai was not keeping good health, and at a friend's suggestion that classical music lessons would help her feel better, she took a few lessons. Listening to those lessons inspired Prabha to learn classical music.


Prabha learned classical music first from Pandit Sureshbabu Mane, and after his demise in 1952, from Smt. Hirabai Barodekar. Both Sureshbabu and Hirabai were children and disciples of Ustad Abdul Karim Khan. While studying under Hirabai, Prabha accompanied her on her musical concert tours in different parts of India.


While studying music, Prabha finished college courses in science and law to receive degrees in both of those disciplines. She later also earned a Ph.D. in music. Her doctoral thesis was titled Sargam, and pertained to the use of sol-fa notes in Indian classical music.


read more from the Wikipedia here


see also coming posts for individual
albums and more info on her.


The Thumri, known for its sensuous romanticism, has been aptly described as the expression of the singer's soul. Unlike in Khayal, the expressive aspect of the song is basic to its delineation. The charm of Thumri thus lies in the singer's skill in portraying its lyrical subtleties with a subtle musical imagination. To facilitate full expression to the poetic mood enshrined in the chosen theme, the artiste is allowed freedom to resort to a variety of voice modulations and appealing articulations in presentation.

The Thumri was once the exclusive preserve of female singers, as it lent itself naturally to their temperament and the feminine voice. Though the contemporary Thumri came into vogue, in Uttar Pradesh, towards the close of the 18th century, its genesis and close association with dance can be traced to ancient times.

The traditional Thumri compositions are all woven in Poorbi and Brij Bhasha, the two dialects of Uttar Pradesh, and are always sung in the traditional style. So tremendous was the impact of this music on the North Indian styles that several classical maestros of different "gharanas" made this art-form a part of their performing repertoire. The names of Abdul Karim Khan and Bade Ghulam All Khan, pioneers, respectively, of the Kirana and Patiala gharanas, immediately come to mind in this context.

On this LP you'll hear Bhimsen Joshi and Prabha Atre mould their Thumris in the clear Abdul Karim Khan manner; while Barkat All is an interpreter par excellence of the style pioneered by Bade Ghulam All Khan. Barkat All Khan can even be said to have given a new elan to Thumri singing by his own individualistic touch to the Patiala accent. The Punjab-ang Thumris by the duo. Nazakat Ali Khan and Salamat All Khan have excitement of their own. Although Girja Devi is the present-day reigning queen of the blue-blooded Benaras "Thumri", the happy mingling of lineaments of Punjab and Lucknow styles in Begum Akhtar's depictions bring home the greatness of one of the India's great singers.

The collage of eight "Thumris" heard in this disc, provide charming facets of the great tradition of light classical music from Uttar Pradesh. This album is bound to become a "Collector's Item".

quoted from the liner notes of the record sleeve 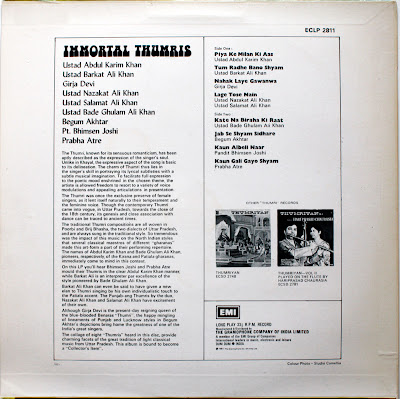 Loving these! Thanks kindly, Mr. Bolingo69!

i'm so looking forward to enjoying this and your previous recent thumri selections. many, many thanks bolingo!

Thank you so much for sharing your collections. The thumris are really really special and quality is above excellent. Can't thank you enough -Pritam