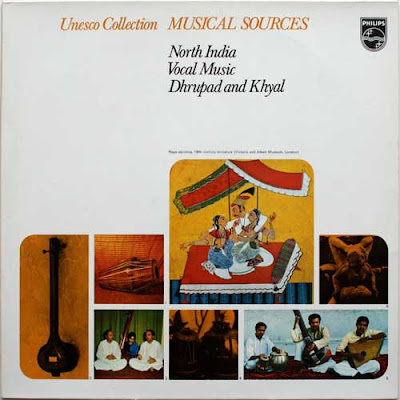 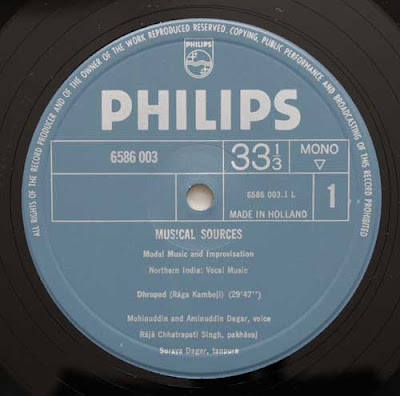 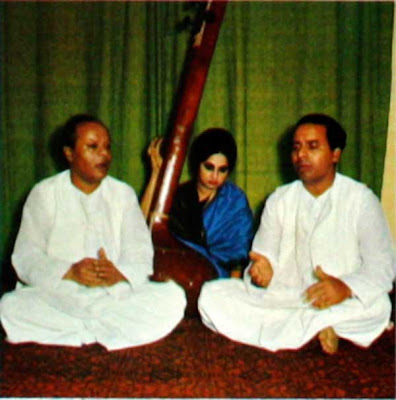 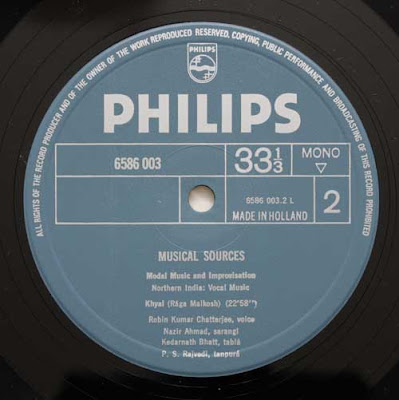 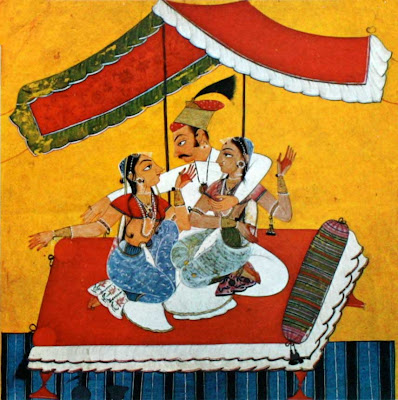 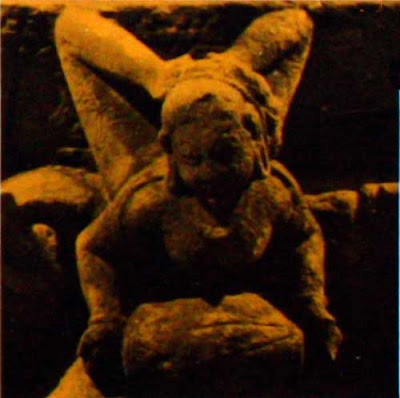 Northern Indian music represents the most characteristic form of purely modal music which is constructed in relation to an absolutely fixed base, the tonic (Sa), without any modulation or change of tonality during the development. In relation to this fundamental sound a scale is established which contains very precise and highly differentiated intervals; these intervals can differ slightly in each mode (raga), and correspond to distinct sentiments. Slight modifications of the intervals, for example a minor third which is raised or lowered by one comma, are felt as conveying very different sentiments. When making his way along the degrees of a mode, the musician brings out and emphasises their expressive qualities by means of ornaments, various ways of attacking the notes, and stylistic procedures. Such a development is only possible in improvisation, in the pursuit of an inner musical idea. A fixed melody allows only the existence of an outline of the sound-material; improvisation alone provides the means of shaping and differentiating it, of imbuing it with an infinite variety of forms. Therefore the only melodic elements proper, and the only ones which can be notated, are short motifs which serve to introduce the words of sung poems.

Once the musician has become aware of the mode and the theme, he sets out to develop and express them in a variety of ways in the successive styles which form the vocal discourse, the latter being composed of a very slow exposition, the Alap, followed by variations in quicker tempi. The words of the song are not taken up until the second part of the development. At the beginning, the voice is employed like an instrument. Indian music is fundamentally vocal, and all the instrumental techniques are conceived as an accompaniment to, or an imitation of vocal sonorities. Numerous and varied forms of song exist, the most important of which in the classical music are the Dhrupad, the oldest, the noblest, and the most austere form, and the Khyal, a form created in the fifteenth century which is more imaginative, more brilliant, and more whimsical (khyal). In each form the development proceeds according to successive formulas which are controlled by very strict rules in such a way that the performance of a piece, although improvised and always shaped anew in every detail, nevertheless unfolds in conformity with an overall design which is always identical. 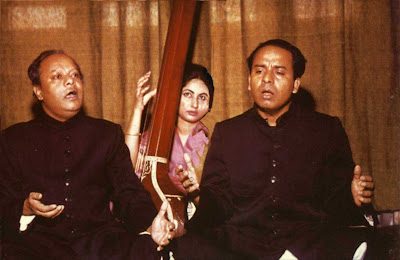 Mohinuddin Dagar (1920-1967) and his brother Aminuddin Dagar (born in 1924) are regarded as the greatest masters of the Dhrupad, a genre which nowadays has hardly any more qualified representatives. They belong to a dynasty of musicians which represent a "musical tradition" (gharana), the origin of which goes back to Tansen, the celebrated musician at the court of the Emperor Akbar (1542-1605).


Robin Kumar Chatterjee (born in Bengal in 1942) is one of the most remarkable singers of the young generation, and one of the very few who maintain the pure tradition of Indian classical singing. He studied music with some of the greatest masters, in particular with Amir Khan who represents the tradition known as Kirana.


notes by Alain Daniélou
snipped from the record sleeve

The raga (mode) is Kamboji (diatonic with minor seventh), a mode which is sung at nightfall and expresses calm tenderness and sweet memories.

The Alap, or extended prelude, is a wordless exposition of the sentiment of the mode. Conventional meaningless syllables are used to support the vocal line.

The Dhrupad (sung poem) proper begins with the entry of the rhythm provided by the drum. The words, which are many times repeated, are taken from an old poem in Hindi by Rasa Khan (Manusha ho to vohi...), which is an appeal to the shepherd-god Krishna: "I cannot live far from thee; cause me to be reborn as one of the cowherds or among the herds of the village of thy childhood."

Alap and Khyal sung by Robin Kumar Chatterjee, accompanied on the sarangi (bowed instrument) by Nazir Ahmad, on the tabla (pair of vertical drums) by Kedarnath Bhatt, and on the tanpura by P. S. Rajvedi.

The raga is Malkosh, a pentatonic mode without second or fifth arid with minor sixth and minor seventh. Malkosh is sung during the first pan of the night. It is a mode which expresses
peace, softness, and tenderness.

The words, in Hindi, of the first part signify "he whom I love has come to my door..." (sajana aye mere dware...), and those of the second part "what strange unrest dost thou inspire in me. . ." (kaisi lagana lagai Balama).

In the Khyal the words are employed right from the beginning, but interludes on sol-fa syllables (Sa, Ga, Ma, Dha, Ni, Sa) also occur. 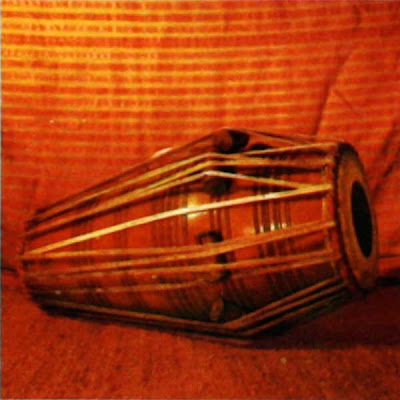 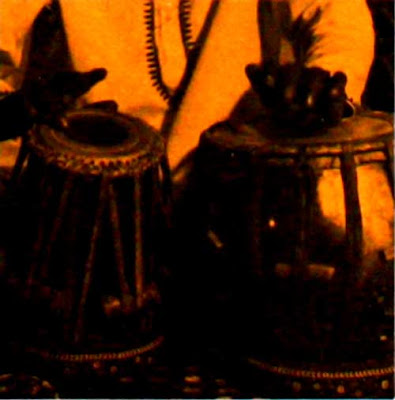 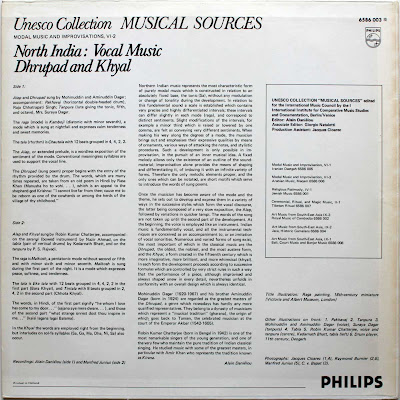 All in all, this is the best dhrupad recording ever released. There have been many singers recorded over the years but a duo is always superior and no duo has been better than the Senior Dagar brothers. This must be their most well-produced recording, and as much as we like to poke fun (and not so fun) at Daniélou we must admit the perfection of this release probably hooked more listeners on dhrupad than any other ...

We only have it on CD. The photos there are not at all this nice. Especially not that of Suraya Dagar, whose tanpura here is the best ever.

Why on earth would you want to poke fun at Daniélou? Jealous much?

This is indeed exceptionally moving. Thank you one thousand times, bolingo ji.

"A mode which is sung at nightfall and expresses calm tenderness and sweet memories".

Thanks kindly bo, this is a very valuable record...a great rendition of Kambhoji by the brothers!

I cannot judge the brilliance of the dhrupad, but I feel some credit should be given to the khyal on the B-side sung by Chatterjee, which I find really astounding in its movement and emotion. If anybody knows more about this singer, let us know for sure!

Could you post an alternate link? The multiupload link doesn't seem to be working :(

I wouldn't know how to express my gratitude for the amazing "karma yoga" you are doing sharing all this...

Infinite thanks and love.