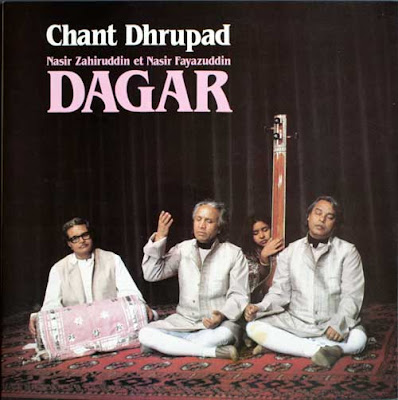 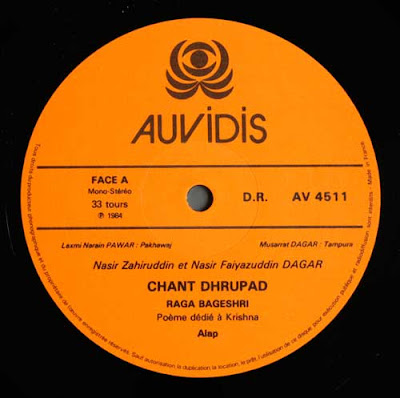 This serious and "great" Raga is to be performed at night.
"The beloved Son of Nand is very torturing
He has trapped me in Has Love
One day to the temple of the Lord of Brij
I went, my friend, only once!"

This Raga is to be performed late after midnight.

"O Thou Shiva, provider of Bliss
And of boundless Knowledge,
Master of Flock. God of the Ganges,
Spouse of the Divine Motherl" 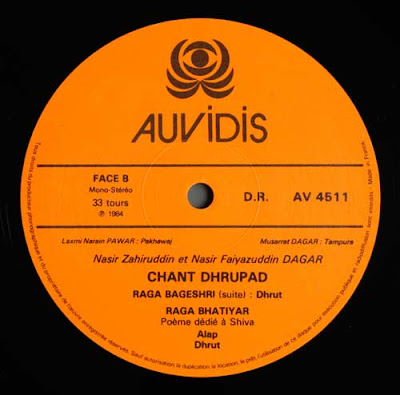 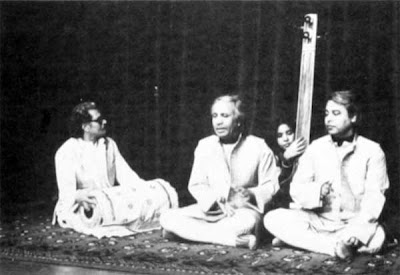 In India, music holds a privileged place as compared to all the other forms of Sacred Art, and this is especially true of vocal music, for it is held to be the most direct path to Union with the Supreme Being In fact Brahma, the God of Creation in the Hindu Trinity, is also the Cosmic Breath, and Indian vocal music is called Nada Yoga. the Yoga of Universal Sound which is the ultimate quintessence and can only be achieved after having gained complete mastery of the eight stages of Yoga. from Yama (restraint) to the state of Supreme Consciousness, Samadhi. Nada or Universal Sound has two manifestations Anahata and Ahata Anahata Nada is the Subtle Sound that can only be perceived inwardly by yogis who have long practised asceticism, for it is not produced by the impact of one object on another It can, however, become manifest in the form of Ahata Nada, when a vibration is produced by the movement of breath, as in singing, or by contact with an object as in instrumental music.

Dhrupad is devotional music and its origins can be traced back to the sacred Sanskrit text, the Sama Veda, which is said to date from the 3rd century BC. Dhrupad is the oldest vocal style of Indian classical music From the chanting of OM, the sacred syllable and the source of all Creation, which is considered to have a physically and spiritually purifying effect on the person chanting it, evolved the rhythmic chanting of the Vedic Scriptures Later still this developed into Chhanda and Prabandha with the introduction of verse and metre. Dhrupad emerged from the fusion of these two elements

As sacred music, then. Dhrupad was sung in temples, the singer seated facing the divinity, totally immersed in his prayer. completely unconscious of the presence or the absence of an audience. All the compositions were prayers which took their inspiration from hymns addressed to gods in the Hindu pantheon.

Dhrupad as it is sung today has preserved its sacred character even though it is no longer a music confined to temples, in the sense that the compositions are still hymns addressed to divinities However, the evolution of regional languages as opposed to Sanskrit from the 12th century onwards led to a tremendous enrichment of these languages. both linguistically and poetically, under the patronage of enlightened rulers In the 16th century Raja Man Singh Tomar of Gwalior was able to encourage poet-saints to write in Brijbhasa. which had come of age as a fullfledged language, and which also had the merit of being immediately comprehensible to everyone The greater part of the repertoire sung nowadays consists of these compositions. The same purity of sound and the same accuracy that the singers of old brought to their chanting of OM are now sought in the exposition and the linking up of the notes during the Alap and the composition. but this is more directly perceptible in the former, which s the introductory part and takes the form of improvisation. The Alap as it has evolved in the Dagarvani is in fact based on the primordial syllable OM, and it is this that distinguishes this particular school from the other Dhrupad traditions Led by their desire to give an evergreater importance to Sound as the pathway to Divine Fusion, the members of this school have opted for pure prayer, without the hurdle of words, in the first part, so that the impact of the sound is stronger. A mantric formula was then used - "Om antaran tom taran taram tom", as much for its meaning as for the sonorous sound of its syllables Due to this, the Alap has become much more difficult to render, but at the same time it has gained an infinite richness and its slow and majestic unfolding is characteristic of the Dagar family's style. Starting from the sound OM at the beginning of the Alap, all the Art of the singer lies in the modulation of breath and volume in order to create a vocal flux, supported by the vowels, while the consonants are used to punctuate and mould the vocal flow, channelling it in the direction most suited to evoke in the audience a mood akin to the mood of the raga that has been chosen.


The degree of abstraction that the singer achieves in the Alap allows the listener to see in the light of his own inner vision, to bring into play his own reserve of sensation and experiences to enrich the thoughts and images evoked by the music. However there is such a fineness of precision in the application of sound and of the microtones that the raga with its distinctive personality is recognisable as soon as the first notes of the Alap are sung The artiste has almost fifty different technical approaches at his disposal which he can use to link up and present the sequence of notes which is characteristic of the raga in question. in order to render them sparklingly iridescent and to express most effectively the emotion they are seeking to portray.

Dhrupad reached its apogee in the 16th century. during the reign of the Moghul emperor Akbar. At that time there were four Schools of Dhrupad, representing this Art in all its diversity. Brij Chand Rajput was of Dagar lineage, so the School of Dhrupad that he headed was called Dagar Vani. The other three Vanis, Khandar, Navahar and Gobarhar respectively. disappeared in the course of time and only in the Dagar Vani has the pure tradition of Dhrupad been maintained and brought down to our day. Until the 18th century the Dagars were Brahmins, but circumstances constrained their ancestor. Baba Gopal Das Pandey, to embrace the Muslim religion, and he came to be known as Baba Imam Khan Dagar One of his two sons. Ustad Behram Khan Dagar, was the most famous and the most learned musician of his time, in the 18th-19th centuries. During the 125 years of life that God granted him, he applied himself to the acquisition S of a thorough knowledge of the Sanskrit sacred texts and by his mastery of the six fundamental treatises he gained the title of "Shatshastri". He devoted the greater part of his life to the rigorous analysis of these texts in order to translate the formal musical rules into a pragmatic teaching method. He distilled the style of singing, the "gayaki" to a degree of purity and clarity never known before, elaborating the Alap and rendering singable the technical forms, which until then had been only names in the Sangeet Ratnakar and other treatises.


His grandson Pandit Inayat Khan Dagar. in keeping with a vow that he had made, only sang his own compositions, which were extremely numerous, and thus notably enriched the Dhrupad repertoire. The two grandsons of Haidar Khan, Behram Khan Dagar's brother, were trained by the latter and were accustomed to sing together in jugalbandi. This tradition has been preserved in the Dagar family throughout the generations. and today it is Ustad Nasir Zahiruddin and Ustad Nasir Faiyazuddin Dagar, the great-great-grandsons of Haidar Khan Dagar, who are perpetuating Dhrupad in duet. 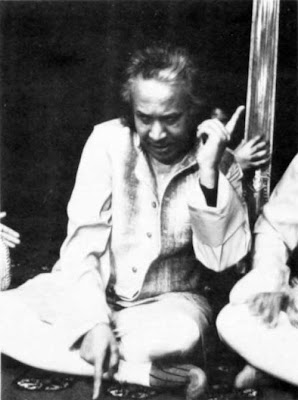 Being only four and six years old respectively when their father Ustad Nasiruddin Khan Dagar died, they received their training in the extremely rigorous discipline of Dhrupad from their elder brothers Ud. N. Moinuddin Dagar and Ud. N. Aminuddin Dagar as well as from their uncles Ud. Rahimuddin, Ud. Riyazuddin and Pandit Hussainuddin Dagar. In addition to their perfect mastery of all the technical subtleties that bring to brilliant life the hidden lustre of each note and each emotion. there is the special quality of their voices, a timbre which can be tender and masterful by turns, or imbued with an unshakeable serenity that is very contagious. Their presentation itself, which springs directly from the very essence of what Dhrupad really is. i.e. the elevation of the being towards the Divine, inspires respect and imparts a soul-soothing peace. Eyes closed, they send up their inspired singing like an offering, filled with their intense Faith in Man and in Cod, and in so doing lead their audience further along the Path. causing all barriers of place, of language, of culture and of religion to melt imperceptibly away.


Pakhawaj
This is a percussion, a drum accompaniment which also has a long tradition. Tablas popularly seen now is a much later development perhaps 100 years old. Pakhawaj is the traditional drum for Rhythm accompaniment it first establishes the regular cycle of 12 or 14 beats depending on the composition and then builds up faster tempo and intricate patterns. The special feature is that all the time it enhances the mood and acts as complementary towards aesthetics.

Laxmi Narain Pawar
Shri Laxmi Narain Pawar comes from a family who have been playing this instrument from four to five generations and are known as Nana Panse Gharana. His ancestors have accompanied members of Dagar family.

Tampura
It is a drone and plays a significant role in this style Besides maintaining the pitch of the basic notes of the vocalist, it gives a tonal dimension and expands the atmosphere. It is being played by Musarrat Dagar, brothers Dagar's niece.

all text above is quoted from the record sleeve 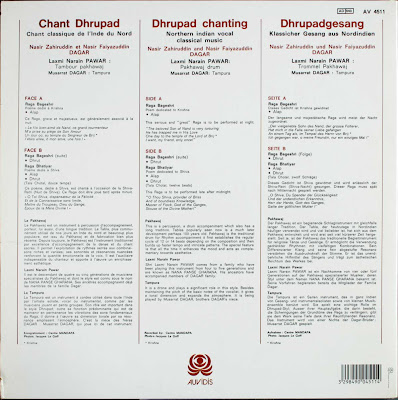 Thanks for all the great dhrupad here already. The Bhatiyar is quite stunning!

This is already more dhrupad than I thought I'd be listening to in my entire life :)

Keep on doing what you do!

Another real gem, thanks again!