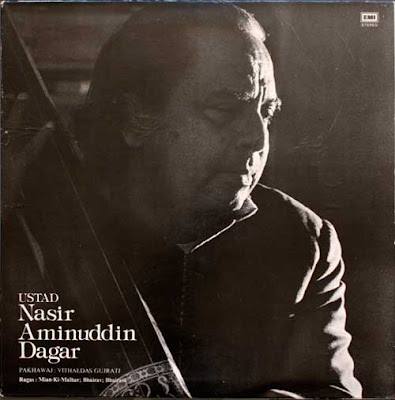 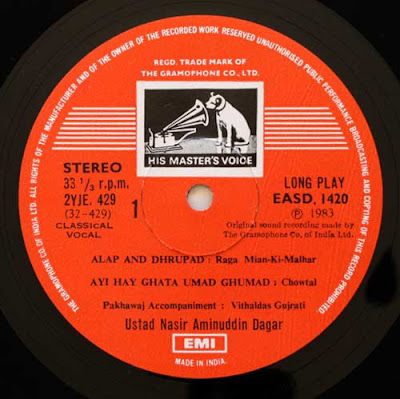 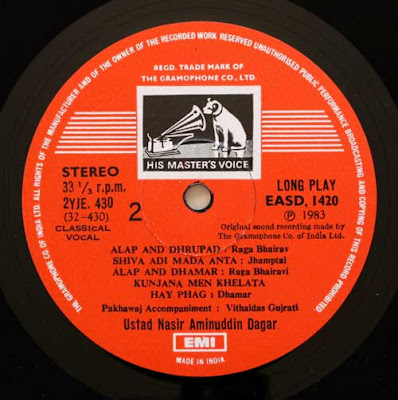 Dagar is not merely a family name but a whole tradition. A descendent of Baba Gopal Das Dagar and Ustad Behram Khan, and the second son of the illustrious Ustad Nasiruddin Khan, Ustad Nasir Aminuddin Dagar was born at Indore in 1923. His training started at a tender age of 5 years. First 8 years of his 37 years of learning period were spent under his father, and the last 19 years under his elder brother, Ustad Nasir Moinuddin Dagar, whom he regards as his main Guru and who died in 1966; he spent the intervening 10 years' learning from his uncles, Ustad Riyazuddin Khan of Jaipur and Ustad Ziauddin Khan Dagar of Udaipur. His belief that he continued learning from his brother until he died is a testimony to his devotion and understanding of the in-depth and essence of learning.

Together as the legendary “Dagar Brothers”, Ustad Nasir Moinuddin Dagar and Ustad Nasir Aminuddin Dagar became the most popular and effective Dhrupad Dhamar singers of their time, and were jointly responsible for popularising, revitalising and uplifting the Dhrupad Dhamar tradition, which had slowly started dwindling with the spread of Khyal gaikee and the infiltration of commercialism in classical music.

Ustad Nasir Aminuddin Dagar has travelled widely all over the world. He visited the USSR and Japan in 1971 with his elder brother, and participated in the Berlin, Venice and the UNESCO International Music Festivals in 1964. European audiences were overwhelmed by their soul stirring performances and the press acclaimed them. Ustad Nasir Aminuddin Dagar gave solo recitals in Europe and the USA in 1971, Iran in 1976 at the Shiraz Festival. Italy in 1978 and the U.K. at the prestigious “India Festival” in 1982. Wherever he sang he cast a hypnotic spell over his listeners with the elegance and intricacies of his alapchari and the grandeur of Dhrupad.

Ustad Nasir Aminuddin Dagar is truly a saint musician. Meeting him and talking to him is a divine experience. Listening to his music is a lesson in spirituality. It makes you unaware of your surroundings. For a while, one may admire the academic excellence of his music, but soon one is lost in the effect created. One is then at peace with oneself. The purity of Akar, the microtonal accuracy, the rasa and the roop of the Raga, the disciplined and the purposeful elaboration or “barhat”, the elegance of gamak, meend, soot, lahak and andolan etc., the structural beauty of the composition, all help in attaining this experience. His rendering is a clear testimony of his traditional upbringing, years of hard work, clean and pure life which should be a lesson to posterity.

Side one of this album contains the seasonal raga Mian-Ki-Malhar, and side two the morning ragas Bhairav and Bhairavi. Alapchari in all three ragas is done with precision and order maintaining “roop” of the respective ragas throughout with characteristic phrases and microtonal accuracies. The dhrupads of Mian-Ki-Malhar, ”Ayi Hay Ghata Umad Ghumad” in Chowtal, of Bhairav, “Shiva Adi Mada Anta” in Jhamptal and the Dhamar “Kunjana Men Khelata Hay Phag” in Bhairavi have all been sung with utmost clarity, maintaining the structural dignity of the compositions. The overall effect is highly satisfying. Pakhawaj accompaniment provided by Vithaldas Gujrati is extremely competent, and appropriate throughout.
snipped from the notes on the sleeve 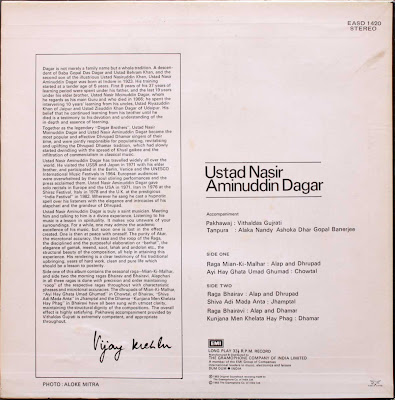 Beautiful, thank you very much Bolingo!

amazing stuff day after day. Thanks so much. Loved to read about this family...

Another wonderful record! Thanks very much, bo! I just noticed that the liner notes were written by Vijay Kichlu, who was once a student of the Dagar Brothers himself, and also learned Agra Gayaki under Latafat Hussain for a while.

Ah, that was the first Dhrupad I ever listened to, and I still love it, particularly the Bhairav. I still have the vinyl somewhere, badly scratched though. Great to see it here in a clean rip.