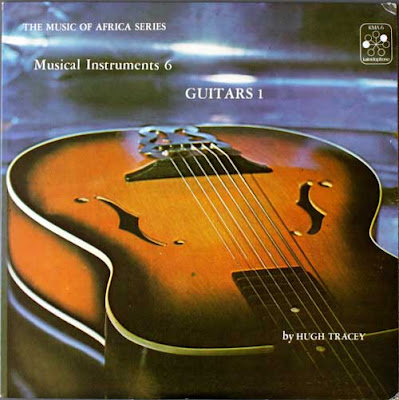 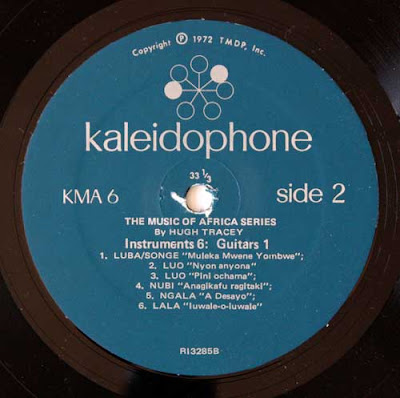 I promised this one long ago and finally I took some new better photos and made a new rip to go along with it. Gutar 2 will follow shortly Hope you enjoy.


It is not certain when guitars were first imported into Central, Eastern, a Southern Africa. They are likely to have been introduced along the seaboard by Portuguese sailors and traders during the seventeenth century, and still earlier by Arabs down the east coast - where the typically Arabian instrument, the Ud (or lute) is still played today by those who claim part-Arab ancestry. The popularity of the guitar among African players became established with the development of industries and the consequent movement of large numbers of people into urban surroundings, away from the normal sources of supply for traditional instruments.

By 1950 the use of a guitar had become the hallmark of ‘town’ music, as opposed to the more familiar forms of country music; the songs for the most part being distant imitations of foreign material set to vernacular wads.

The proliferation of factories producing simple and inexpensive guitars for the African market has brought the instrument into prominence during the last decade but has added little to innate musicality or to the craft of indigenous instrument making; the skill of the guitar players featured in this record is the exception rather than the rule. 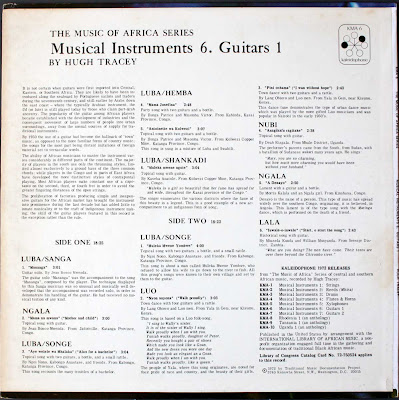 some of the finest guitars ever recorded and a timeless favorite..
thank you Bo as ever for spreading
so nicely , Beauty to the world.

Hi brothers Nauma and Arvind! I know this may be "old hat" to a lot of people but I really love these LP's and the sleeves are great compared to "other" editions.

Happy you liked them! I should have posted them long ago!

new hat to me! this and the subsequent volume are just wonderful. it is amazing to hear other cultures pick up a familiar instrument and adapt it to their modes of expression. and yes, the art is fantastic, too. thanks!

So great to have all these Tracey recordings (and everything else posted) in digital form. I'm amazed by the effort and echo the gratitude.

I would love to pay back a small part of my debt with some Indian vinyl rips, but want to avoid overlap. Can I reach you via email?

Beautiful share. Visited the Tracey museum last year. Many thanks!