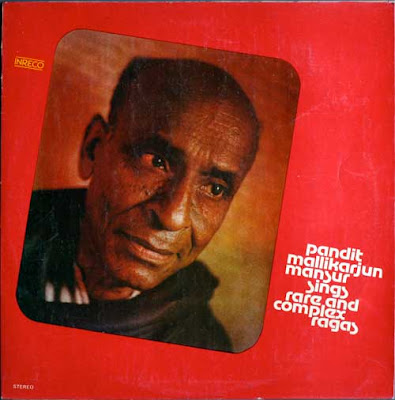 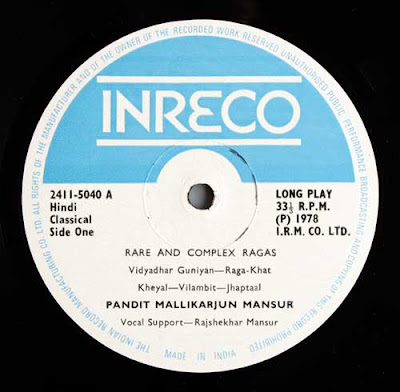 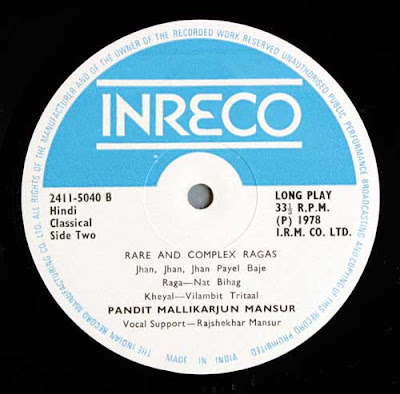 Raga Khat, is one of the most difficult and controversial morning ragas, representing a unique blend of six “ragas”. It takes “panchama” as its “vadi swara” and “shadja” as the “samvadi swara”, and is “sampurna” in character. The maestro renders this “raga” in “vilambit”. set to “jhaptaal”, a rhythmic cycle of 10 “matras”.

Raga Nat-Bihag, is a night melody difficult of delineation but known for its bright, vivacious mood. It embodies a subtle fusion of two "ragas", namely. “Nat” and “Bihag”. It takes “panchama” and “shadja” as its “vadi” and “samvadi swaras”, respectively. The “raga” is rendered here in “vilambit”. set to “tritaal”, in 16 “matras” 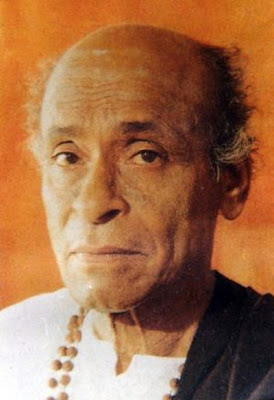 Mallikarjun Bheemarayappa Mansur, (1910–1992) Indian classical singer of the khyal style in the Jaipur-Atrauli gharana. He received the three national Padma Awards: Padma Shri in 1970, Padma Bhushan in 1976, and Padma Vibhushan in 1992.

read some more on Wikipedia here

Ustad Alladiya Khan, who pioneered what has now come to be known as the “Atrauli gharana”, was a many-sided genius. He set a new and significant trend in classicism which marked a radical departure from several “khayal gharanas” then in vogue. With its equi-proportional fusion of “swara” and “laya” the style displayed an immaculate sense of construction and architectonics reminiscent of Himalayan grandeur. The intractable vocalism was equally notable for its rich and varied repertory of well-known and rare melodies and their complex “bandishes”. Kesarbai Kerkar, Moghubai Kurdikar. Ustad Manji Khan, Lakshmibai Jadhav and Bhurji Khan, to name but a few, are among the celebrities of this hallowed tradition.

Pandit Mallikarjun Mansur, who presents two of the most complex melodies of the “gharana”, is its reigning maestro today, and its only performing exponent from the older generation.

Panditji, who was born at Mansur. a village in Oharwar district, Karnataka State, had his initial training in vocal music from Pandit Neelakanth Buva Alurmath, a disciple of Pandit Balkrishna Buva Ichalkaranjikar, a maestro of the Gwalior tradition. Later, after six years. Mansur had the benefit of further guidance from Ustad Manji Khan and Ustad Bhurji Khan, the illustrious sons of Ustad Alladiya Khan. They gave the talented youngster a winsome command of technique and excellence of presentation. To these virtues he added his own rigorous practice and indomitable determination.

The result is the emergence of a musical personality whose unquenchable urge for self-expression, at 67, symbolises the triumph of the spirit over the body. The “Khayals” in “Khat” and “Nat-Bihag”, heard in this disc, come as an emphatic re-affirmation of Panditji's pre-eminence in the field. His vibrant voice, accurate intonation, amazing breath-control, uncanny “layakari” and his fervid expression, at his age, are something which put him in a class by himself, an unrivalled master. Which is why Pandit Mansur still continues to enjoy a large following all over the country. Even today, no major musical event is complete without his participation. He has also been a regular broadcaster for the last several decades. He has also lent his services to All India Radio as music adviser for ten years.

The President of India has honoured him with the National Award for Hindustani vocal music while the University of Karnataka has conferred on him the honorary degree of D. Litt. in recognition of his distinguished services to the cause of music. He is currently honorary director of the Institute Music and Faculty of Fine Arts of the university.

Rajashekhar Mansur, who provides vocal support in this disc, is Panditji's son. Young Rajashekhar, who teaches English at Karnataka University, reveals himself as an up-and-coming performer in his own right.

snipped from the notes on the record sleeve 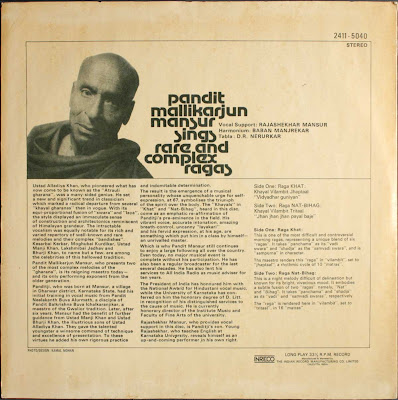 Wonderful music from one of the masters of hindustani vocal. Thank you very much, bolingo69!

Thanks for another record of Mansurji's music, bolingo!

Thanks very much for this.

Pandit Mallikarjun Mansur was famous for singing rare and complex ragas through his use of octaves. He was a musicians for musicians. There was always a special intensity to his singing, a special urgency and earnestness in his treatment of melody. Thank you for the album